OBSERVATIONS ON BACILLUS TYPHOSUS IN ITS FILTERABLE STATE

Recently, through the simultaneous availability of the Rife microscope, an instrument combining very high magnification with coordinated resolving power, and a simple procedure for inducing the filterable state in bacteria at will
1, the possibility of actually demonstrating organisms in this hitherto illusive condition very obviously presented itself.

Two features of the Rife microscope, full details of which will be presented elsewhere, must be specifically mentioned here. First, the entire optical system, including not only the lenses but also the illuminating unit, is made of quartz. In addition, a double wedge quartz prism is mounted between the illuminating unit and the quartz Abbé condenser. The latter can be rotated, with vernier control, through 360 degrees, thereby affording readily controllable polarized light at any required angle. The import of this polarization unit will be discussed later. Inasmuch as this microscope magnifies from 5,000 to 17,000 diameters, it is obviously very necessary to have it mounted upon an immovable foundation.


The organism selected for these experiments was the well known Rawlings strain of B. typhosus. The immediate history of the culture used is as follows:


2 from the agar slant culture.
November 3, 10 a. m. Filtered this culture in K Medium of November 2, through a Berkefeld "N" filter. (The culture was diluted with four volumes of sterile physiological saline solution; the vacuum used was less than four inches of water; the total time of filtration was less than ten minutes.)

November 3. One drop of filtrate, representing one-fifth drop of the original culture, was introduced into six cubic centimeters of K Medium. Incubated at 37 degrees centigrade. The filtrate was also tested for purity as follows: (1) cultural reactions; (2) sugar fermentation reactions; (3) agglutination with specific typhoid serum. All were typical.

November 5. The forty-eight-hour culture of November 3 in K Medium was filtered, as above, through a Berkefeld "N" filter. One drop of the filtrate was added to six cubic centimeters of K Medium and incubated at 37 degrees centigrade.

November 6. The twenty-four-hour culture of November 5, which grew well, was again filtered. This time the finest Berkefeld filter, "W," was used. As before, a drop of this filtrate was added to six cubic centimeters of K medium and incubated at 37 degrees centigrade. Growth was abundant November 7.

November 9. The culture was again transferred to K Medium.

November 12. Still another culture was made, in every instance using three loops of culture for the inoculum.

It is worthy of note that this thrice filtered culture of B. typhosus grew quite readily in K Medium as above outlined: after the second filtration it failed to grow in peptone broth. In other words, the organism having become filterable and accustomed to protein media (proteophilic) lost its ability to grow in ordinary peptone containing nutrient broth.

The cultures of November 9 and November 12 were examined under the microscope and there were no discernible bacilli, although the cultures were markedly turbid. Darkfield illumination revealed very small, actively motile granules, and direct observation of these with the oil emersion lens confirmed the presence of these motile granules, without, however, affording any indication of their structure; Therefore, these granules for obvious reasons could not be unequivocally diagnosed as the filterable form of the bacillus. 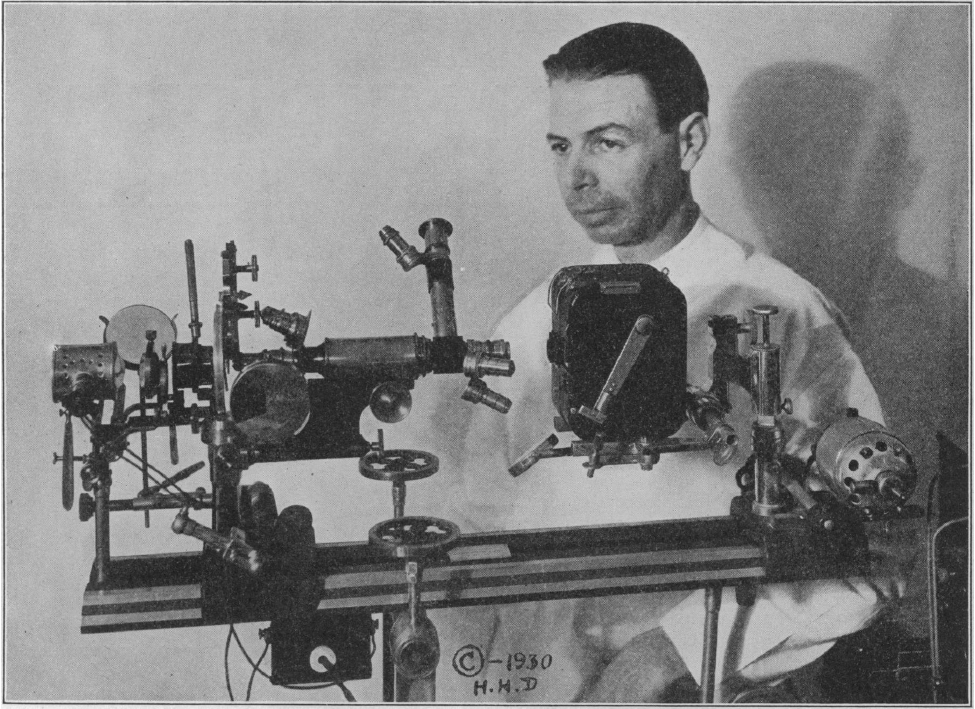 Fig. 1.--Photograph of the microscope and its inventor. Royal Raymond Rife. Ph. D. In the illustration the source of illumination is to the extreme left, the light passing through the substation condenser and then through the optical system. The vertical tube is the observation tube. The three lenses are directed toward the camera. The camera is a special stop motion camera for standard films. Beyond the camera is the motor to drive it. The stage on which the instrument is placed is so arranged that the microscope can be tilted through any axis from horizontal to vertical.

In this viable, filtered state the culture was taken to Pasadena, California, and, through the instrumentality of Dr. Milbank Johnson, the cooperation of Dr. Alvin G. Foord, and the courtesy of the Pasadena Hospital, the necessary space and equipment for mounting the microscope and continuing the cultures were made available. The subsequent developments, which are the immediate subject of this discussion, are as follows:

November 16. The cultures of November 12, made in Chicago, were transferred to fresh K Medium and incubated at 37 degrees centigrade overnight.

November 17. The Rife microscope was installed and the first cultures, those inoculated November 16, were examined. The preliminary observations of these cultures were made with a polarizing microscope with a spectroscopic attachment. It should be borne in mind that the entire optical system of this micropolarimeter was of quartz. A one-eighteenth-inch apochromatic oil immersion lens was used, with a 20x quartz ocular.

When a culture of B. typhosus in the filterable state, grown as above indicated in K Medium,
was examined with this micropolarimeter, it was observed that the plane of polarization of the light passing through the culture was deviated plus 4.8 degrees, with the simultaneous appearance of a definite blue spectrum. With this observation in mind, the culture was next studied with the Rife microscope at 5000 diameters.

The double wedge quartz prism referred to above was set by means of the vernier to minus 4.8 degrees (The reason for setting the quartz wedge in the reverse direction will be discussed in another place). Examined in this polarized light, this thrice filtered culture of B. typhosus cultivated in K (protein) Medium showed small, oval granules, many of them quite actively motile. These motile granules when in true focus appeared as bright turquoise-blue bodies, which contrast strikingly, both in color and in their active motion, with the noncolored, nonmotile débris of the medium.


There is another even more direct procedure for establishing the identity of these small, oval, motile, turquoise-blue bodies. It has been shown in previous communications 3 that agar cultures, or better, broth cultures of B. typhosus inoculated into K Medium, become filterable within eighteen hours' growth at 37 degrees centigrade. It should follow, inasmuch as not all of the bacilli appear to become filterable under these conditions, that at least some of the bacilli should have similar turquoise-blue granules within their substance if they are indeed passing to the filterable state. Also the free swimming filterable forms, the small, oval, motile, turquoise-blue bodies described above, should be simultaneously present.

Dark field examination of such a culture eighteen hours old revealed unchanged, actively motile bacilli, bacilli with granules within their substance, and free swimming, actively motile granules. This culture examined in the Rife microscope with the quartz prism set at minus 4.8 degrees and with 5000 diameters magnification, showed very clearly the three types of organisms just described, namely:

First, unchanged bacilli: These were relatively long, actively motile, and almost devoid of color.
Second, long, actively motile bacilli, each with a rather prominent granule at one end. The granule in such an organism was turquoise blue, reminiscent in size, shape, and color of the small, oval, actively motile, turquoise-blue granules found in the protein medium (K Medium) where, it will be recalled, no formed (rod shaped) bacteria could be demonstrated. These bacilli having the turquoise-blue granules were colored only at the granule end, the remainder of the rod being nearly colorless, in this respect corresponding to the unchanged (nonfilterable) bacilli just mentioned.