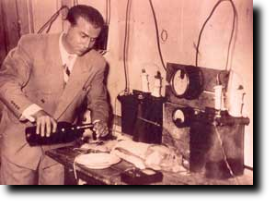 The Story of Antoine Prioré

Over a period of 25 years, between 1950 and 1975, he is said to have cured all incurable cancers in animals, from mice to dogs with a unique electrotherapy device he invented. He hoped to do no less than to revolutionize the treatment of cancer.

Many tests on man were successful, with the decrease and sometimes with the disappearance of the tumour although the adjustments were very delicate and some modifications led to a worsening of the cancer.

The majority of these treatments, conducted in collaboration with the Faculty of Medicine,  hospitals in Bordeaux and sometimes with the Academy of Sciences, consisted of a powerful radiation of electromagnetic waves.

In all his life, Prioré tried to increase the power of his appliances in order to improve their efficiency.

Supported by the most renowned scientists, he got some enormous state and industrial financial assistance (more than twenty million franc, approx. 3 million dollars) to finalize a machine permitting to validate his results in an unquestionable way. Unfortunately, he used this amount for the construction of a last apparatus with technologically limited possibilities. An apparatus with such a power that it would be able to cure any incurable human tumour or illness.

Refusing all collaborations in order to protect his "secrets", he succeeded in constructing a huge "generator" which was inaugurated by the French Prime Minister, J. Chaban-Delmas.

Several members of the Pasteur Institute tested the unit with success and confirmed the extraordinary possibilities of the apparatus. 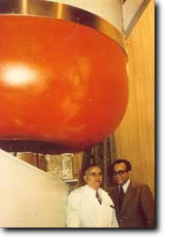 Priore and Pr Pautrizel under the apparatus (very partial View of “The Machine”: a monster of two floors!!)

The machine is reported to be comprised of the following: 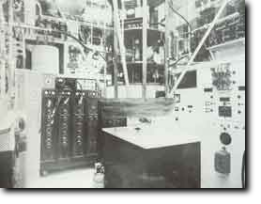 Several experiments have been carried out. Some of these are summarized below:

1. A cancerous tissue was grafted to laboratory rats. Twenty-four control rats died within 22-30 days. In those rats which had been exposed to radiation to the magnetic field from Priore’s machine, the cancerous tissue was either completely absorbed, or, if the treatment was begun after cancer had started to spread, had regressed to the point of total cure.There were no observed bad side effects and there was no recurrence of the cancer.

2. A different and highly malignant strain of cancerous tissue, leukaemia, which can cause death in as little as two weeks, was grafted onto laboratory rats. Again, exposure to the radiation in the magnetic field resulted in the complete inhibition of growth of the cancerous grafts, or, if the disease had started to develop before the treatment was begun, to its total regression.

3. Mice were inoculation with a microscopic blood parasitic (Trypanosoma equiperdum) which causes sleeping sickness and death in short time. The course of the experiment could be followed closely by analyzing blood samples taken daily. All control animals died by the fifth day. Mice exposed daily to the radiation and magnetic field survived (38 out of 46 animals) with complete disappearance of the parasites from their systems.They also developed a specific immunity to further infection. Animals exposed some days before inoculation appeared to have developed an immunity.

4. Rabbits, which develop a chronic illness when inoculated with trypanosomes from which they usually die after several weeks, were tested with the radiation in a magnetic field with the same positive results as described above.

A twenty-man commission composed of well known men of science, medicine, law and other professionals, have begun and are continuing investigations into the claims made for this mystery machine. They have been able to report experimental findings, but have not been able to provide an explanation of the workings of the Prioré equipment. Funding was provided by the French Government to construct a third and more powerful machine which cost 3.5 million dollars. It was called the M-600 and functioned for about one week until a huge tube in it exploded. Due to the inflation rampant in the early 70’s, the replacement cost would have exceeded one million dollars which was felt to be too high to continue the project.

The story of this remarkable work began in 1944 when Antoine Prioré noticed some oranges which had been left in a room next to some electrical equipment. These oranges remained in a fresh state while others not near the electrical equipment became rotten and putrid. This anomaly intrigued young Prioré to explore magnetic and electromagnetic effects on various plants. One of his earlier experiments was the exposure of lentil seeds to a magnetic field of 225 gauss at electromagnetic frequencies of 80, 32, 3 and 10 Hertz. This caused the lentils to grow 12-15 centimeters in length as compared to only a 5 centimeter growth for controls not subjected to the same treatment. The effect proved similar for asparagus, tulips, and other plants. Hens’ eggs were then exposed to the same energies which brought about hatching in 19 days as opposed to the normal 21 days. Later research using cancerous tissue yielded partial or total remissions when exposed to these energies.

Similar reports of tumor regressions were obtained by Kenneth McLean with the use of a 3000 gauss or greater magnetic field. Later tests made by Biraben and Delmon using a field strength of 4500 gauss on T-8 tumors had not the slightest trace of remission. This showed that there was obviously something besides a magnetic field at work.

Tests made with the Prioré machine on cancer tissues ALWAYS caused total remission in all tissues exposed to the peach blossom violet color which the machine emitted. The machines of Antoine Prioré were dismantled shortly after his death in the early 80’s. Rumours say that research on his equipment is continuing in South Africa.

Scientific Documents on the Prioré Machine

Do the French Have a Cure for Cancer, by David M. Rorvik
(Originally published in Esquire, July 1975)

Healing of the Acute and Chronic Experimental Trypanosomiasis by the Combined Action of Modulated Magnetic Fields and Electromagnetic Waves, by A. Priore

(Submitted to Bordeaux University, France, in 1974. Translated from French)

The Prioré system has been studied in France for 15 years by an independant group of doctors and researchers who have recovered the last Prioré machine.
The group is called "Laboratoire ARTEC" and their and web site is www.priore-cancer.com or http://www.priore-cancer.com/index_uk.htm for the English pages.

Comments on the Prioré Machine by Aubrey Scoon, a prominent Rife researcher:

"As for the Priore machine. It was basically a microwave emitter modulated with RF which also had a strong magnetic field. Now look up Priore's own research papers and see how when parts of his machine failed it carried on working regardless! After reducing all the bits that were probably irrelevant you end up with an overblown Rife machine. He was even using Rife's frequencies! Do you need quantum mechanics to describe how a Rife machine can work? I don't think so. We haven't even tried, let alone exhausted any of the conventional explanations yet!" 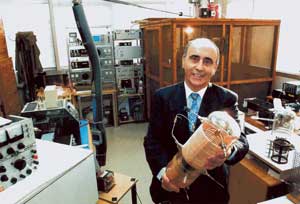 The Case of Antoine Prioré
and His Therapeutic Machine:
A Scandal in the Politics of Science

Christopher Bird wrote a well researched article on the history of the Priore machine.