The End To All Disease

A magazine article by Aubrey Scoon published in "Everyday Practical Electronics", in the UK 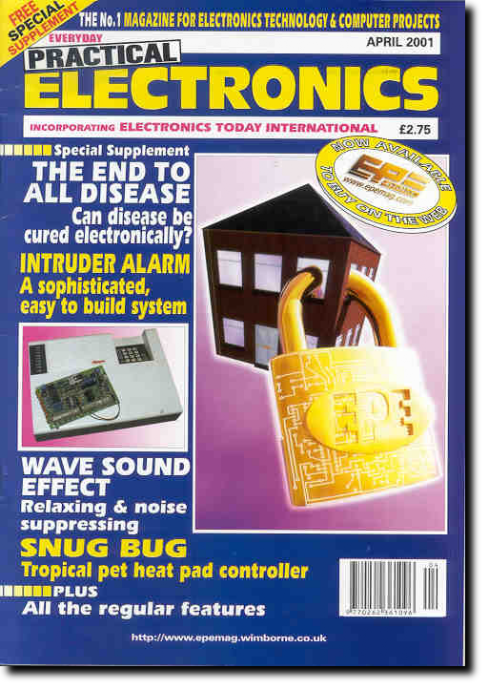 On Thursday, 8th March 2001, the popular British electronics magazine "Everyday Practical Electronics" released a "Special Supplement" on the life of Royal Raymond Rife in their April 2001 edition. As this is a European magazine, we contacted the publishers involved and obtained special permission to release their complete article on our web site on the condition that we state their magazine as the source of the information.

Please note that this copyrighted article is available here on permission of the publisher and the copyright for this article remains with : Wimborne Publishing Ltd, Allen House, East Borough, Wimborne, Dorset, BH21 1PF, UK. 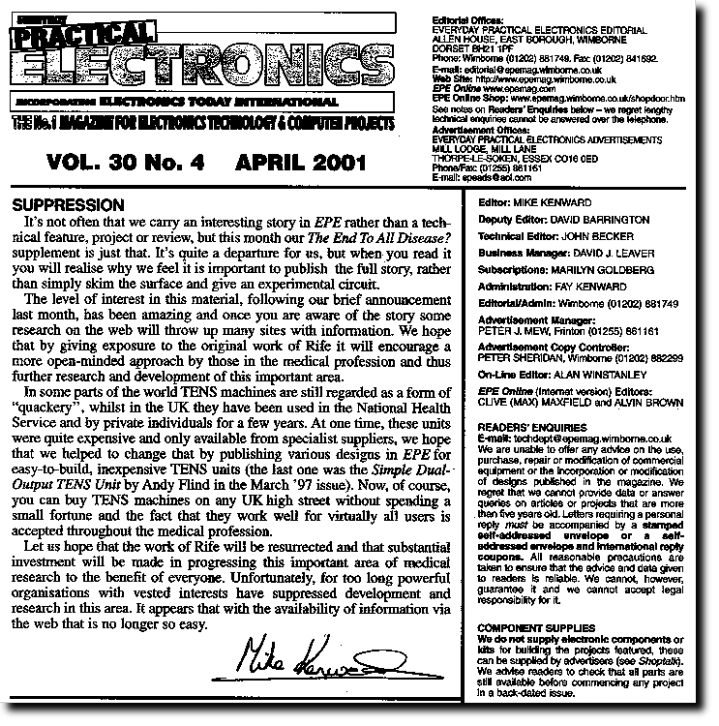 The End to all Disease, by Aubrey Scoon. Copyright 2001, Everyday Practical Electronics[link:1]
[/link:1]

Further Comments from the Author!

On 22nd May 2001, I received the following E-Mail, containing additional comments to the above article, from the author Aubrey Scoon. We are publishing his comments here on his request!

Hello Peter,
Thanks again for posting my Rife article on your web site. I've had lots of responses both as a result of the magazine and from your posting.

I've just posted the comments below on the , basically in response to the few negative comments from people who obviously haven't bothered to read the article properly! :-) It's up to you but I thought you might be interested in posting it alongside the article or even on your . I've been monitoring the forum occasionally but I've been reluctant to post directly because I'm very busy and I don't want to get drawn into protracted discussions with people on the forum.

Comments by Aubrey Scoon!
I've received numerous responses regarding my article in the April edition of EPE. It appears that some people have misread parts of the article or jumped to conclusions about what they think I meant as opposed to what I actually said! So I'd just like to clear up a few points that have been misinterpreted.

Firstly the circuit described in the article is for a simple magnetic pulse device. It is NOT a Rife device and I have never made any claim to that effect. The only association with Rife's work is the fact that I personally tried it with Crane frequencies that have been (probably wrongly) attributed to Rife. The article is designed to throw some light on several aspects of electrotherapy. Whilst Rife is the main focus of the article it is not exclusively about Rife - so the fact that various devices are mentioned does not imply that they are all forms of Rife device or that they have anything to do with Rife.

The reason I decided to try a magnetic pulse device was to test an initial theory of my own that it was the magnetic field from the Rife ray device that was responsible for the bactericidal effect. I have since found that I can duplicate the effect with pure electric fields, magnetic fields and even infra-red light. I haven't tried electromagnetic fields - all the pure scientific research I have seen indicates that normal EM fields (i.e. radio waves) do NOT (in general - there are exceptions) exhibit the Rife effect.

So to all the people who have commented to the effect that my circuit doesn't produce EM fields or is an inefficient EM transmitter - it is NOT an EM transmitter, it's just a crude prototype designed to create pulses of magnetic flux, nothing else.

Some readers have asked me for therapeutic recommendations for the magnetic pulse device - I mentioned clearly in the article that I am NOT recommending medical treatment with this pulser. It was not designed as a proper therapeutic tool. It was meant to confirm some crude experimental results. I have no idea of what the long term effects of exposure to pulsed magnetic fields might be and recommend that anyone who wants to experiment with this should do so with extreme caution. If you want to see if the Rife effect works, try it on a sample of mould or bacteria in a culture dish - don't go around trying to cure people with it. If you want to try it on yourself that's up to you, but I didn't tell you to do it!

I did not comment anywhere in the article that I recommended this kind of treatment and that I thought it was inconditionally safe. On the contrary I clearly stated that I thought it could potentially be very dangerous. I did mention that other people had claimed it was safe - but I didn't make that claim myself. There are many different forms of electrotherapy and many different kinds of devices - each should be independently assessed and treated on it's own merits, something I didn't try to do in my article.

A few readers have commented that the super-regeneration wavelengths quoted from Rife's papers are higher frequencies than the carriers. This is true but one should not literally accept that an original Rife machine consisted of a simple modulated carrier - in fact the little information that does exist about those original machines indicates that they may have been more like mixers than simple modulators. I believe I now know the significance of the "super-regeneration" aspect of Rife's original machine and intend to expand on that in a forthcoming follow-up article.

With regard to how the Rife effect works, I believe that magnetic and electric fields are inducing electrochemical changes in cell membranes which affect electrochemical pumping mechanisms. In particular I believe that the Rife type machines interfere with proton pumps that are fundamental to the operation of bacterial cells, but which are not present in animal cells. I have no idea how the Rife effect works on viruses and as yet I don't even have the basis of any theory because viruses are very different to animal/bacterial cells. I am working on an expanded theory that may account for how infra-red pulses can produce the effect by photoelectrochemical absorbance, but I would like to clarify that I do not endorse the view that the Rife effect is due to mechanical resonance - Rife thought it might be, but I didn't say I agreed with that idea!

I do encourage readers to do their own research - look at proper published scientific research papers - don't just accept what you read on some web site or book or advert (or even magazine article!) either for or against - the only way to find the truth is to look for it yourself with an open mind. Some people have commented that the only correct way to approach this is with skeptical thinking, but there is a flaw in that because a skeptic in my definition at least is someone who refuses to believe the facts before them unless they can be made to fit an accepted, conventional theory. But the facts are the facts, the theory needs to be modified to fit the facts, not the other way around! Unconditional belief is just as bad because despite the best intentions of some of the "distributors", a lot of the material that one reads about Rife etc., on places like the web is unresearched and in many cases just plain wrong. But you can read from some of Rife's original papers, you can find proper scientific research papers and finally, best of all, you can do your own experiments and see it for yourself.

You can do historical research too. The full story is a lot more interesting than just my brief description. You can find information on the people mentioned and events referred to - look it up and decide for yourself what is true or not. I recommend that readers read Barry Lynes book, look at James Bare's experiments, the reports on Peter Walker's Rife Information Web Site and also check out the recently available reproductions of audio tapes and video films of Rife himself talking about his work - but don't stop there, keep looking!

The true spirit of scientific method is to investigate somethng with no preconceived ideas about whether it's right or wrong etc. It involves simply looking at the facts, checking and verifying them, and then formulating a theory to fit them. The moment one makes any assumption either way, the scientific method has been lost. The same applies if you discard any facts you don't like or introduce unverified information as fact. The fundamental reason why such a promising field of research is still in it's infancy is simply because many people are more concerned with forming themselves into opposing camps of skeptics and believers than with simply looking for the truth for themselves.

I have a couple of personal rules of thumb that are not strictly in accordance with the true spirit of scientific enquiry but may be valuable in general. Firstly, if someone is trying to sell you something, then any information offered in support of their product should be treated with the utmost suspicion unless it can be independently verified. Secondly, if anyone quotes a dozen pages of their professional qualifications in support of their pet theory whether for or against, that should also be viewed with suspicion, because facts speak for themselves - they don't need qualifications, accreditations, certifications and accolades to be facts.

Anyone who needs to do this to promote their ideas probably has a very weak case, because facts should stand on their own merits.