×
Go to content
The First Rife Microscope and the Gained Ability to Observe Viruses and the Fine Structure of Bacteria
With an Optical Microscope by the Overcoming of the Fraunhofer Diffraction Limit
by Gary Wade, physicist Date: 12th September 2014
Source: http://rifeenergymedicine.com/RFM.html
Introduction
This is my second article on the Rife type microscopes, which have the ability to see the fine structure of bacteria and viruses in living medium with visible light, because Dr. Royal Raymond Rife found a way to overcome the Fraunhofer diffraction limit. He did this by using the Principle of Reversibility in optics in a new and novel way. In my first article, Appendix A of another paper I wrote, I went over in some detail the pertinent unique details of Rife type microscopes that make them so special and unsurpassed to this day in magnification and resolution ability with crystal clear clarity of image.(ref.1) In this article I am going to review some of the important points discussed in Appendix A, but I am going to mainly focus on the construction of Dr. Rife’s first microscope build in 1920, which was able to reach 17,000 power magnification (ref. 2). Dr. Rife had INVENTED A NEW METHOD TO MAGNIFY an object by greatly expanding the cross sectional area of a central region of a nearly focused image (converging beam) from a objective lens about its optical axis. This new form of magnification in conjunction with Dr, Rife’s novel method to suppress and essentially eliminate Fraunhofer diffraction phenomenon and the fact that he found a way to also effectively eliminate chromatic aberration, gave the Rife Microscope unsurpassed magnification, size resolution, and crystal clear clarity of vision that no other optical microscope has even come close to.
Intention of Article
My intention here is to write a clear and concise enough article so that the optical engineers, scientists, and students will see how relatively easy it is to build these Rife type microscopes with today’s materials technology, machining technology, and opto-electronics availability. From this realization, then have universities and microscope manufactures start building a new class of world class optical research microscopes. This will or should trigger a research revolution in microbiology and virology. However, it is not only microbiology and virology that need Rife type microscopes for rapid detailed research results. With today’s boom in nanotechnology, micro composite materials technology, and semiconductor devices, there is a great need for a fast accurate way to observe down to the few angstrom resolution level. The properly designed and built Rife type microscope can do this.
Physical Layout of the First Rife Microscope
Now that you have been made aware of why you should want to know more about the specifics of the Rife microscope, let us get to it. Pictures 1, 2, and 3 are of Rife’s first microscope. I know of no published plans or specifications for Dr. Rife’s first microscope. So, my writings here about Rife’s first microscope are based upon what I can observe and deduce from what I can see from what appears in Pictures 1, 2, and 3 and other pictures and various news paper articles and journal articles and magazine articles, and from what I know of optics (ref. 3,4,5). Some very useful clues and information of the internal construction of the first microscope can be gained from an article on Dr. Rife’s third microscope, 50,000 power (see Picture 4), which was published in February 1944 issue of The Journal of the Franklin Institute, Vol. 237, titled THE NEW MICROSCOPES, A Discussion by R. E. SEIDEL, M.D, AND M. ELIZABETH WINTER , pages 103 to 130. The same article was also published in the Annual Report of the Board of Regents of The Smithsonian Institution. That is how important they thought it was. This third microscope called, THE UNIVERSAL MICROSCOPE, was designed not only to observe microbes at here to fore unbelievable magnification and size resolution with crystal clear clarity, but was also designed to do microbe dissection (nano- surgery) and collection/abstraction from the environment down to virus size structures. It was also designed to do ultra detailed studies of crystal structures.
Picture 1 shows the setup using the first Rife microscope used by Dr. Rife to make motion pictures of microbes going about their normal life processes. The rectangular box looking device in front of the microscope eye piece is the motion picture camera. The eye piece of the microscope is the same (matched pair) as the objective lens system of the microscope, except there is an adjustable outer sliding coupler shroud on the lens system needed to couple the camera to it and the eye piece is oriented in the opposite direction to the objective lens system. Picture 2 shows an enlargement of a section of picture 1, where the various components have been given numbers so as to be able to name, describe, and explain what that part (number) does.
Click on images to enlarge. 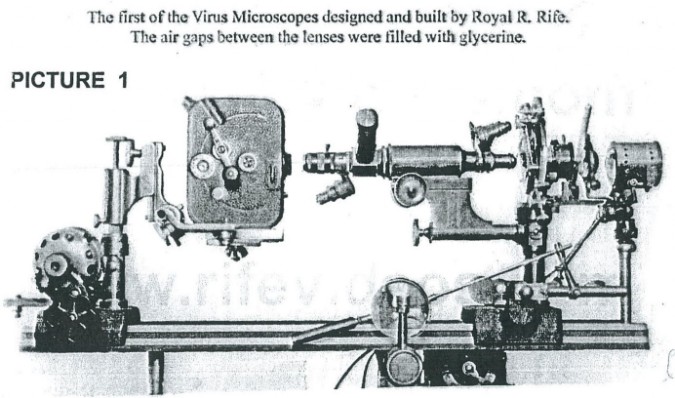 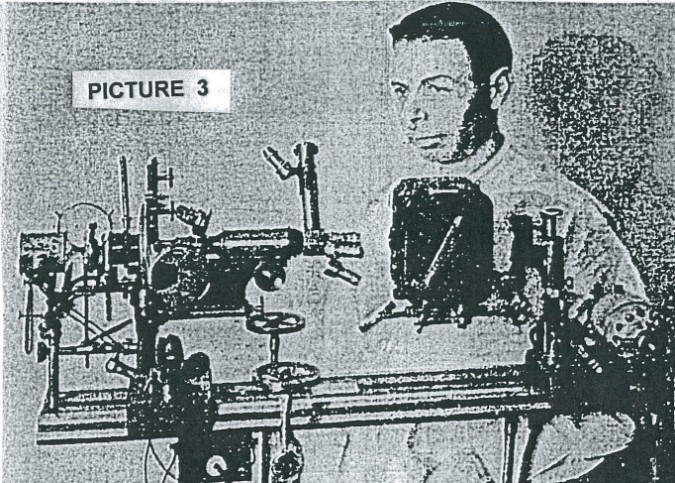 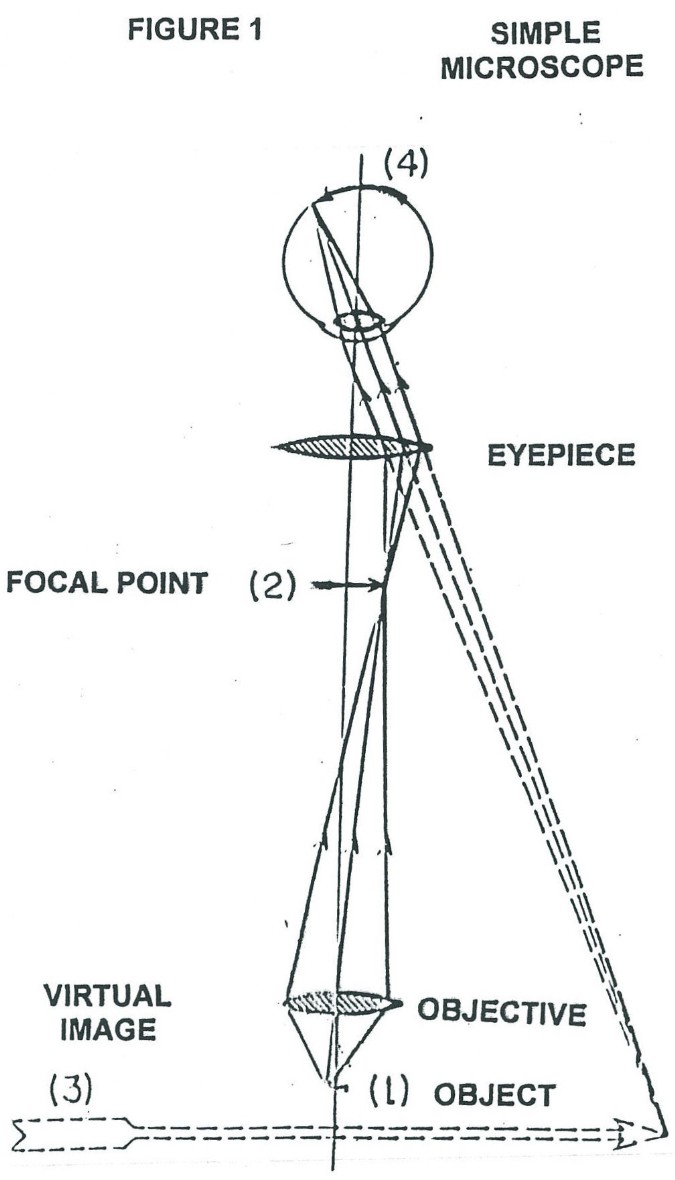 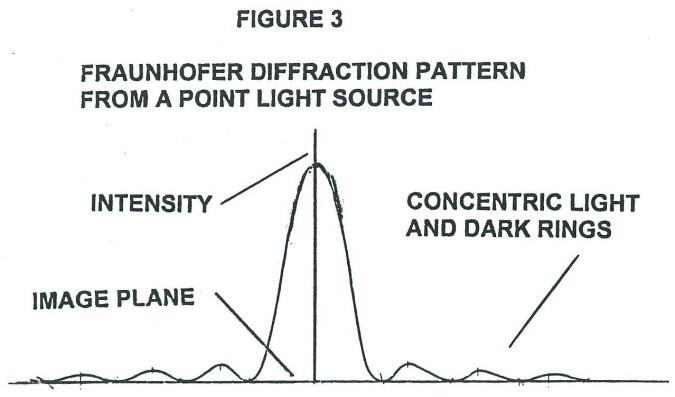 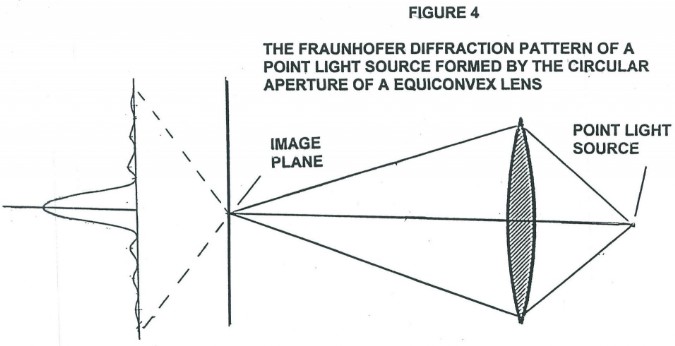 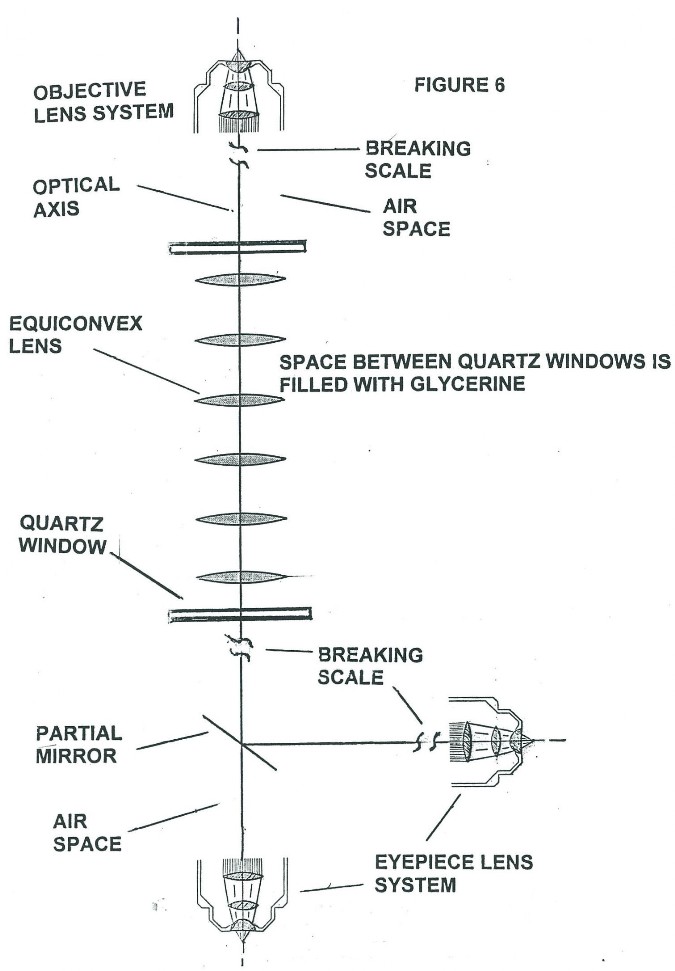 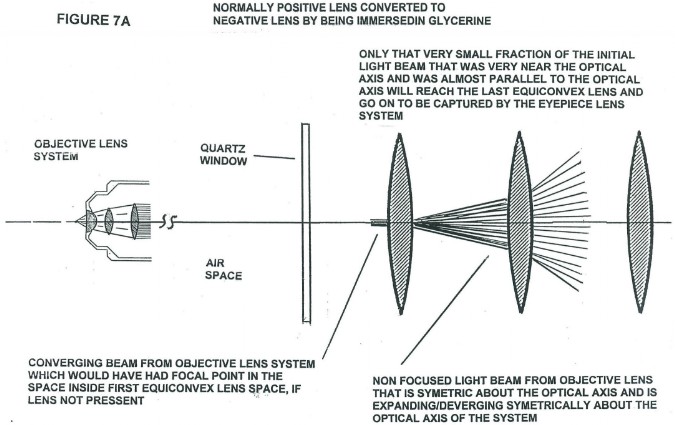 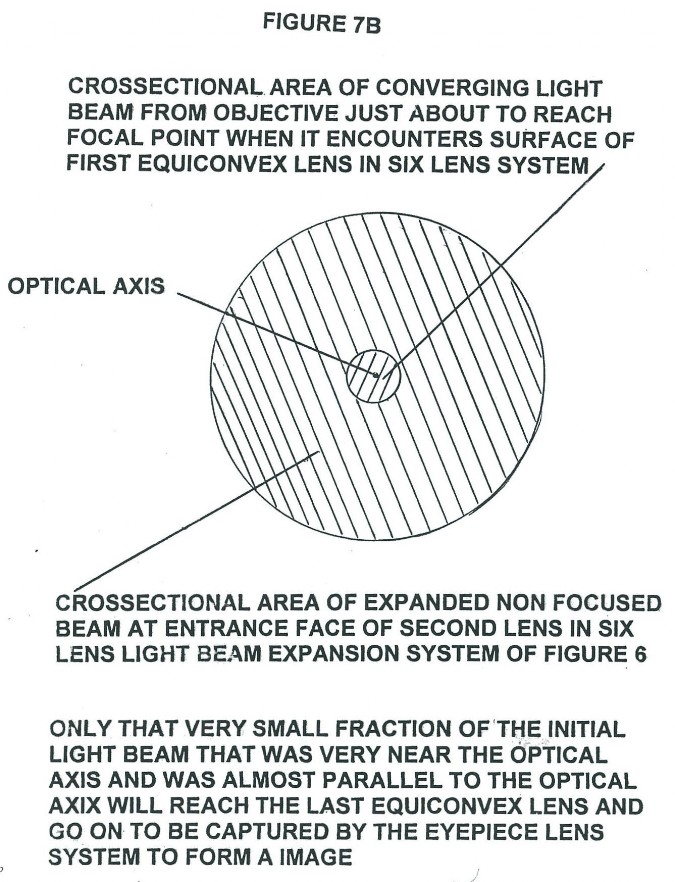 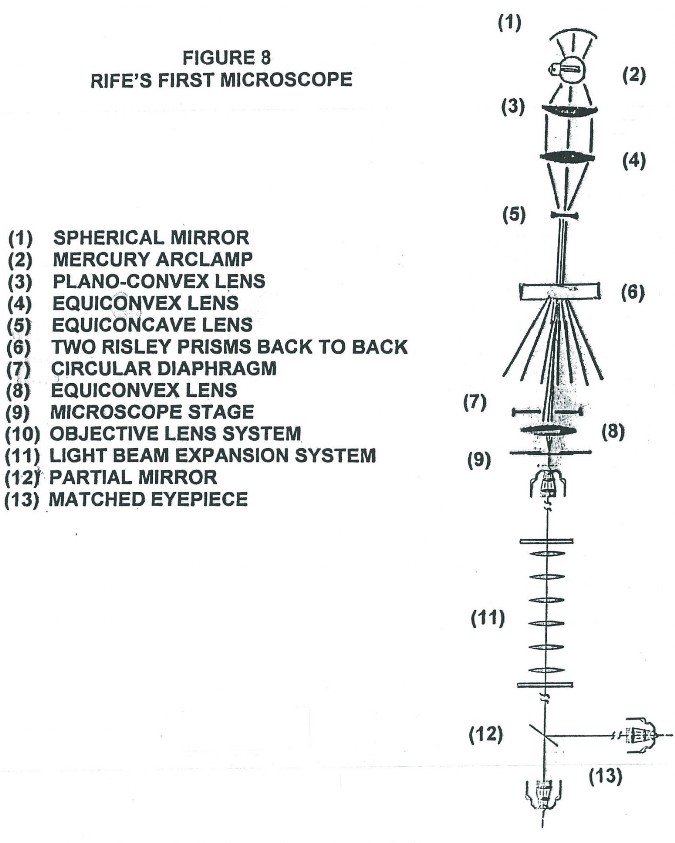 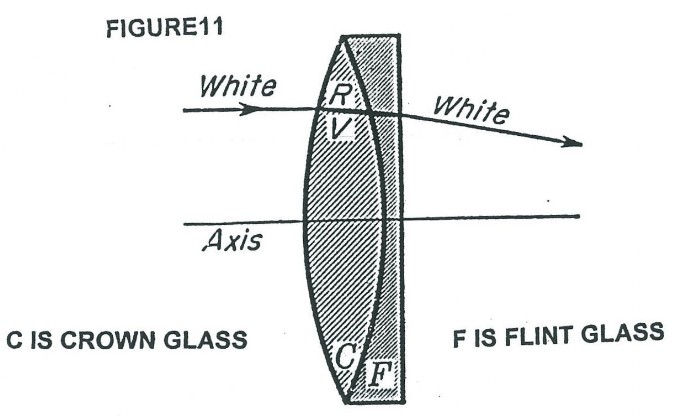 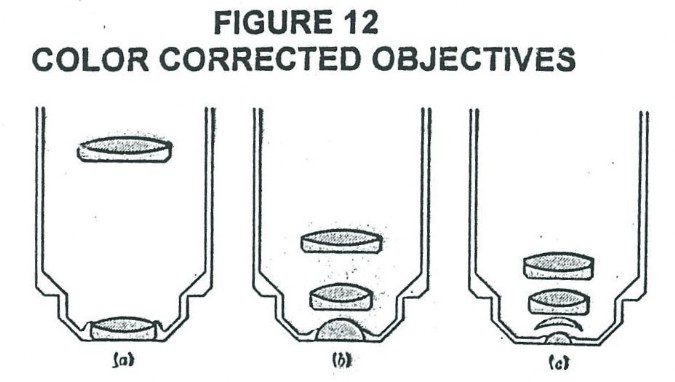 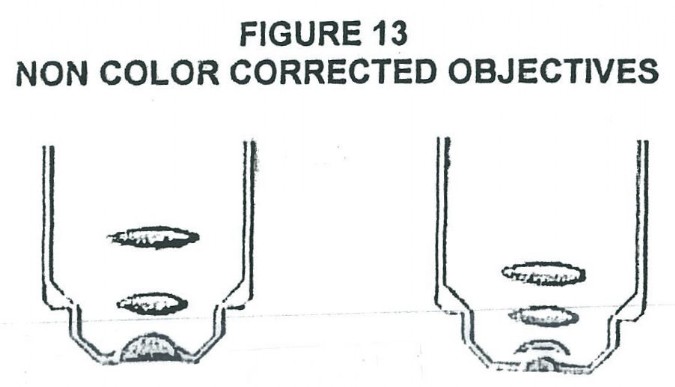 A Modernized Version of the First Rife Microscope
Figure 14 is what a modernized version of a Rife microscope modeled after Rife’s first microscope could look like.  This microscope could be built by any present day university using a good optical ray tracing program to design what you want once you understand the principles upon which the Rife type microscope are based.  Then you would need the mechanical engineers to figure out how to fixture the lens in the system using material that have essentially the same coefficients of expansion and contraction as the lens material being used (i.e. with quartz you would use the metal alloy magnelium).  The cost of this microscope would be much less then the cost of a good research electron microscope.
The advantages of the Rife microscope over the electron microscope are:
What the actual limits of resolution and therefore effective useful magnification will be for the modern Rife type microscopes is not known.  However, there is every reason to believe that it can easily surpass that of the best currently available electron microscopes. 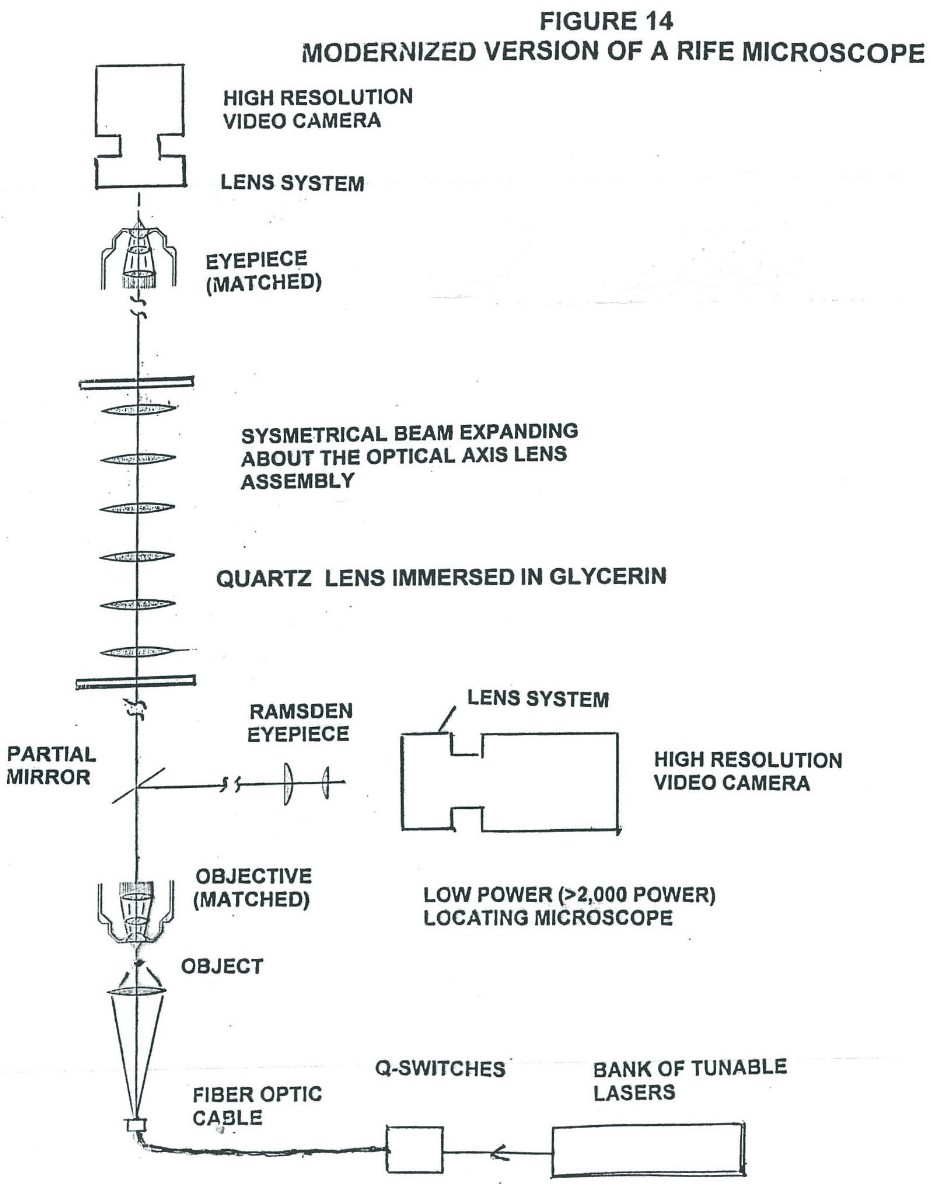 Conclusion
The here to fore thought Fraunhofer diffraction limit, which limits currently designed and used optical microscopes to a resolution size in the range of .2 microns and useful magnification to around 3,000 power can and was greatly overcame by the First Rife Microscope constructed in 1920 and by the four other Rife Microscopes built by Dr. Rife (ref. 6).
There is a great need today for Rife type microscopes in microbiology, virology, material science technology, nanotechnology, and micro electronics.  These needs could and should be met by the construction of modern production versions of Rife type microscopes.
As of the writing of this article, Dr. Rife is (2014 – 1920 = 94) years ahead of his time and counting.  I am sure Dr. Rife would want us to catch up.  He attempted to get us caught up by putting his third microscope (50,000 power) on long term loan to the California Institute of Technology back in the mid 1950’s, but Cal Tech dropped the ball.  Several generations have passed now, so perhaps the current generation can pick up the ball and carry it across the goal line to bring us all the fruits of a revolution/renaissance in microbiology, virology, nanotechnology, materials technology, and micro electronics.
HOME WORK PROBLEM FOR THE BRIGHT ONES
In Figure Z below is shown a Rife type microscope system where a matched pair of objective and eyepiece lens systems are being used in conjunction with a single machined block of quartz or clear sapphire (hidden from view by partition).  Determine a machined shape of all surfaces, relative orientation, and dimensions of the machined block to obtain 500,000 power magnification,  with 5 angstrom resolution.  Be sure to precisely define the surface of both the entrance and exit ports for the light going from the objective into the block and going to the eyepiece.    Assume focal length of objective lens is .2 meters with a convergence angle of 2 degrees and the objective lens is 250 power.  HINT:  Use whatever wavelength of light you want that is compatible with optical materials used throughout the optical system.  You will use total internal reflection inside the machined block to cut down on (stop) light intensity loss and you are allowed to use one normal mirror surface (i.e. silver deposited on machined/polished plane surface).
References: 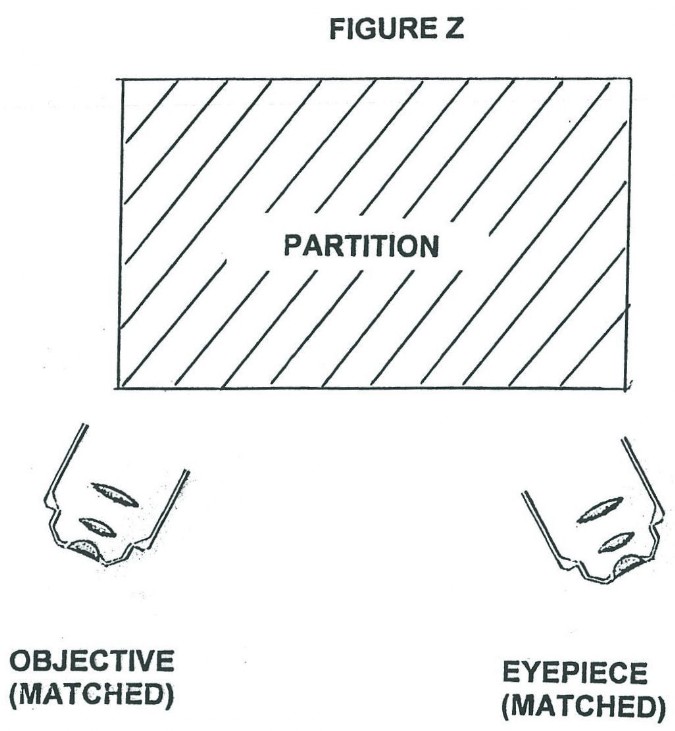