In Australia, a serious placebo (sometimes called double-blind) study was made to demonstrate the effectiveness of using audio frequency therapy in the treatment of arthritis using a prototype of the PET Rife-Crane unit. Behind this study is, amongst others, Geoff Baker (B.App. Sci) who spent years of his life and millions of dollars studying and perfecting his PET device. In order to achieve medical approval (TGA listing) for the sale of the PET unit in Australia, this Placebo trial study was made under scientifically controlled circumstances. The following report is a complete transcript of the final report into Internet format.

The following report is the property and copyright of BWBGelTech/Electromed Australia and released here with permission. My thanks go to Geoff Baker of Electromed for his help in allowing this report to be published on the Internet.

Device used in the study

PET Unit later sold in Australia for the treatment of arthritis 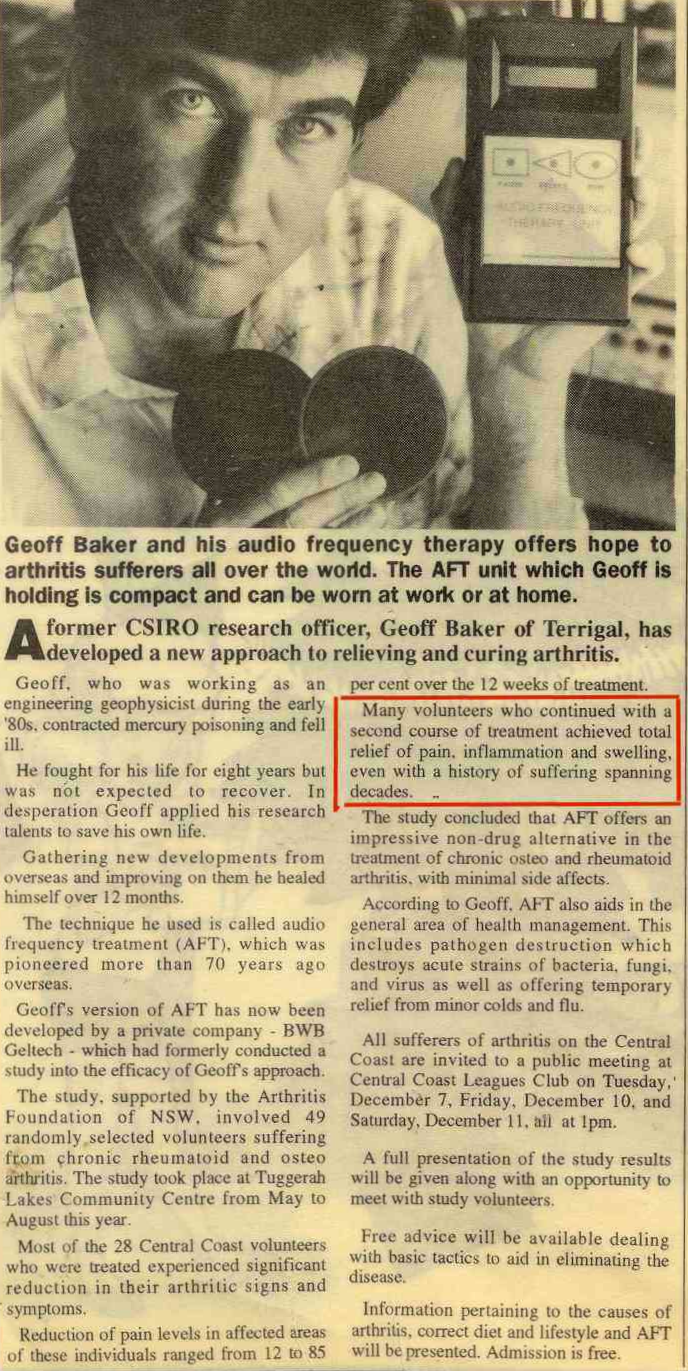 The foundations of Audio Frequency Therapy lay in the laws of physics. Its theories and application are unrelated to Traditional Medical Practice and drug therapy.

For these reasons the overall supervision of the following study was undertaken by a qualified Science Professional in co-operation with interested Australian Medical Specialists and General Practitioners.

We wish to express our great appreciation to:
· the Organisations, Companies and Medical Professionals who contributed valuable assistance and advice to the study.

· the General Practitioners of the study volunteers who complied with the Study requisites.

With special thanks to
· the long suffering Study Volunteers for their patience and commitment to regular attendance of therapy sessions.

The effectiveness of Audio Frequency Therapy in relieving arthritic symptoms in 49 randomly selected volunteers suffering from chronic Rheumatoid and Osteoarthritis was investigated in a three month placebo study conducted at the Tuggerah Lakes Community Centre on the Central Coast of New South Wales (10th May 1993 to 14th August 1993).

The study was initiated by a private company, BWBGELTECH PTY LTD seeking assistance from an arthritis support organisation, interested doctors, and a commercial laboratory.

Placebo study conditions were strictly adhered to, with no volunteer being aware of whether he or she was receiving treatment. Three treatments per week of three hours duration were administered using thirty-four Audio Frequency Therapy Units (AFTU's - ARTG No. AUST L 48725) produced by BWBGELTECH. These pocket sized computerised devices allowed carefully selected menus of frequency programs to be applied to each chosen volunteer.

All participants were regularly monitored by self-evaluation of pain on visual analogue scales which complied with a standard hospital protocol for monitoring pain in arthritis patients. Also pre and post study HLB testing was provided by Australian Biologics Testing Services (Sydney) for seven randomly selected volunteers from the treated and placebo groups. Similarly, independent post-study appraisal of each volunteer's condition by their referring General Practitioner was requested.

On completion of the study, the mean value of percentage reduction in overall pain (Figures 1 and 2) of the treated group was 34 percent (n = 28 ) compared with 13 percent reduction in the untreated group (n = 21). The mean 13 percent reduction of pain in the untreated volunteers was generally attributable to the emotional benefits received by being involved in the study. This improvement was not evidenced in the blood test results.

The significant improvement in treated volunteers signs and symptoms was confirmed in written testimonies requested from each participant at the conclusion of the study.

Those who experienced no improvement with treatment during the short term of the Study were generally late stage chronic arthritics whose pain was primarily related to an advanced state of degeneration of their joints (generally joint replacements were pending) or they were suffering from pain due to unrelated illnesses. Further long term treatment may bring improvement in these individuals when combined with other forms of regenerative therapy.


The results of the trial suggest Audio Frequency Therapy offers an effective non-drug based alternative in the treatment of chronic Osteo and Rheumatoid Arthritis with minimal short term side effects.

Newspaper Articles about the Arthritis Study

As with any new technology, this method was attacked by sceptics. You can read Electromed's response on this page.
Back to content