In the course of my on-going research into Rife, I have been given a lot of information by other researchers. Amongst that information is more technical data on early Rife machines. I also have copies of original Rife lab notes that have never been released before, I intend to do so, as soon as practically possible. The sheer amount of data I have at present is far more than the capacity of my web site. I am committed to finding original, quality data about Rife's work and in particular the machines. On this page I publicly present for the first time, information about other early Rife and Hoyland machines.

On this page I will introduce information about two machines which I think are important to Rife research. The first is information on a US Naval Transmitter from the early 1930's of a class known as a "MOPA", which is short for "Master Oscillator Power Amplifier". One of the researchers I work with, Robert Harrison, who is an expert on early radio technology came to the conclusion some time ago that Rife's original machine and the Beam Rays machines were probably examples of MOPA's. This idea was fully confirmed when the British Rife Group managed to obtain an original Beam Rays machine which was indeed a classic MOPA design.

Bob Harrison researched his theory further and found information about a particular US Naval Radio Transmitter that appeared to match Rife's description of his original machine extremely well. Bob also found schematics of this device and for the first time I am very pleased to be able to make this data publicly available. Please note that all opinions, errors etc., are mine, but the data itself and the real credit for this work belongs to Bob Harrison.
In the absence of any other information I am personally of the opinion that this schematic and machine is very probably the basic schematic of the early 1931 Rife Ray that was used at the Scripps Ranch clinical trial in 1934, and the one that Phillip Hoyland based his later designs upon.

The "MOPA" was a popular design in the 1930's. It was quite simply a "power oscillator" designed to drive an antenna directly. Many radio transmitter designs of the late 1920's through to the mid 1940's were of the MOPA type. It was only natural that Rife and Hoyland would have considered using such a design.

One MOPA in particular however has special interest. In various early Rife records it is mentioned that Rife was supposedly a commander in the US Navy. If that was the case (it is unconfirmed) then he would probably have had access to Naval equipment. Also of course San Diego was the site of a major US Naval base, so any such equipment would have been "right at his front door" so to speak.

The power systems in ships are quite different to conventional domestic power systems. In particular, all power used in a ship needs to be generated on board, and for sensitive equipment needs to be stabilised. It was therefore common to drive radio transmitters and the like from their own battery banks. The power from the batteries was run through a motor generator that converted the DC from the batteries to high frequency AC and this could then be transformed normally.
It is interesting to note that Rife's original machine was said to run from batteries and motor generators. A shipboard transmitter would have already had all such required power generating equipment. Rife's original machine was also said to be large, a shipboard MOPA would also have been large. In one of his descriptions of his early machine Rife says he used "six stages of amplification" which ended in a 50W Telefunken tube.

Bob Harrison found details of a Naval Machine that fits this description very well, it is the RMCA ET-3626-C Transmitter. It doesn't have "six stages of amplification" as such, but it uses 6 parallel 50W tubes (the 50W Telefunken tube was common) in a combined power booster stage to give 300W total output. So whilst an engineer would not call these "stages", the description does fit well in layman's terms.

I present the schematics below and I believe this machine could have been modified to be a Rife machine. 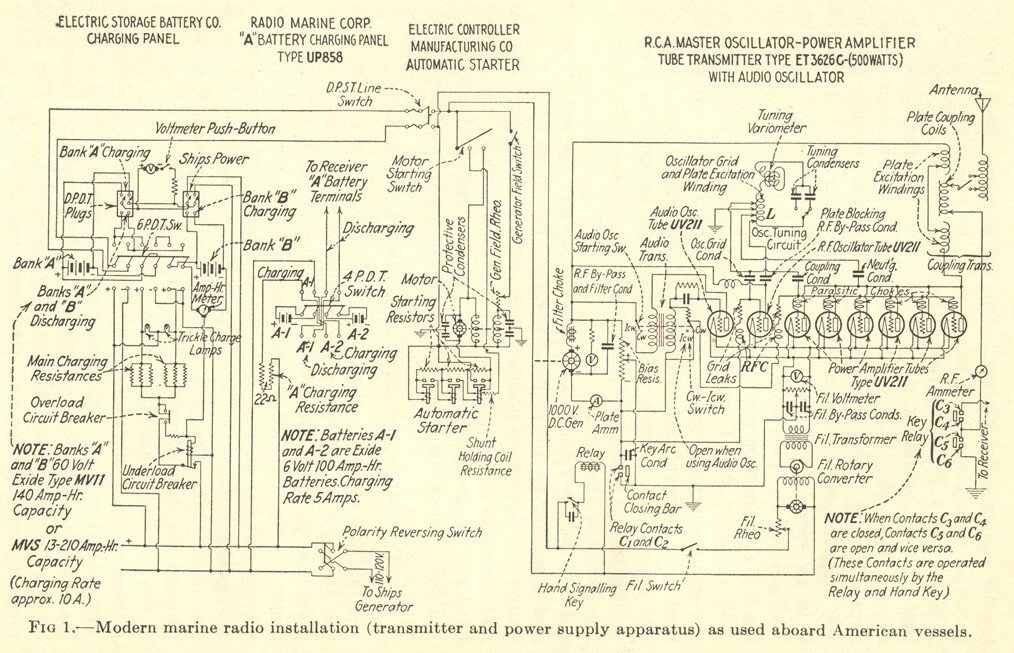